Most Columbians rent homes on Pawleys Island, or own them, but there is an interesting subset of travelers who prefer to rent a room at an inn that serves meals, and Pawleys Island has two, the Sea View Inn and the Pelican Inn, the only commercial properties on the island. How far they have come, the folks at Pawleys, once supporting Kings Funland with trampolines, miniature golf, and pool tables, as well as the famous Pawleys Pavilion that hosted bands, beer and babes.

Now, Pawleys Island is a quiet “family beach” with leash laws for the pups, light laws for the turtles, and glass laws for containers on the beach.

This Columbian spent two nights at the Sea View Inn one week and two nights at the Pelican Inn the next week to have the experience of two meals prepared and served each day with nothing else to do in particular. Both were a different experience than what my wife and I had expected.

The Sea View Inn has 20 rooms for rent on the ocean front. Built in 1937 by Celeste and Will Clinkscales, the Sea View Inn always has been an inn and the rooms and the common spaces were designed for what it is, an inn. Each bedroom is small, think two single beds with a small toilet room. The sink is in the room itself. The shower is down the hall. There is a bottle opener from the 1940s screwed into the wall below the sink. There is something else; oh, I know, there is no air conditioning. The bedrooms have double windows that stay open during the summer and a ceiling fan that never turns off. There are two box fans in the room to use, if needed. Each bedroom has a solid door but if you rather, you can leave your door open during the night with a saloon door providing you privacy, but not much security. For big city visitors, it will take some getting used to, feeling safe through the night with a rusted hook and eye latch on a saloon door that even I could crawl under but I felt totally safe and slept like a baby.

The best feature of the Sea View Inn is the porch facing the ocean. The porch is 20 feet deep with a row of rocking chairs across the entire porch. The breeze and the view of the ocean drains the tension from the body. There is a large living room with comfy furniture and a similar room behind it with sunporch furniture and a communal fridge to hold wine and soft drinks that visitors bring to enjoy. Then there is the dining room, as big as both living rooms. Breakfast is served at 8:30 a.m. (coffee available by 7 a.m. for us insomniacs), and lunch is served at 1:15 p.m. You will know when a meal is served by the massive bells ringing throughout the building that can be heard on the beach. The name of the guest family is written on a card propped on his or her table. A kitchen staff of maybe as many as 10 people deliver the food to the table, refill water and tea, bring desserts and later clean up. 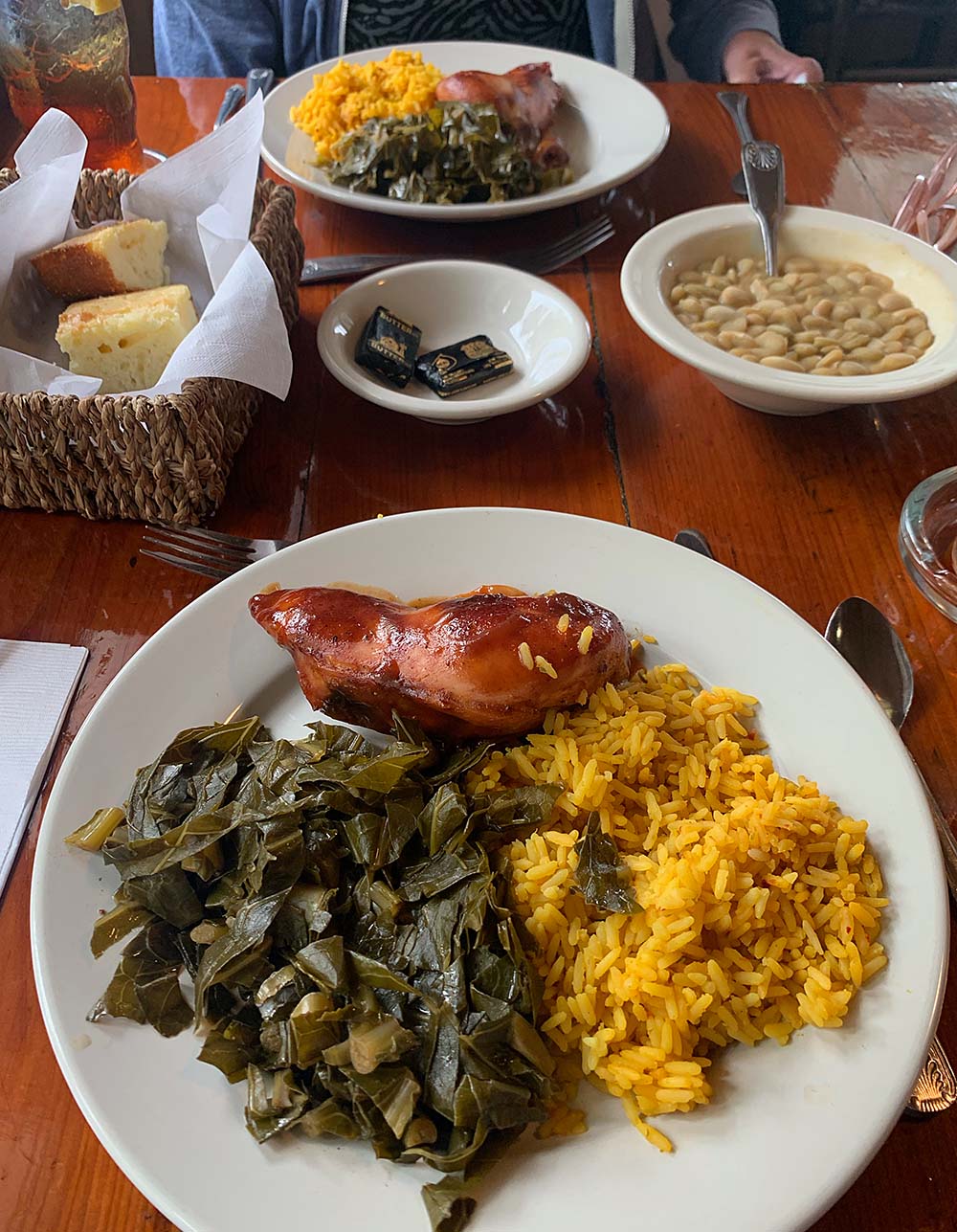 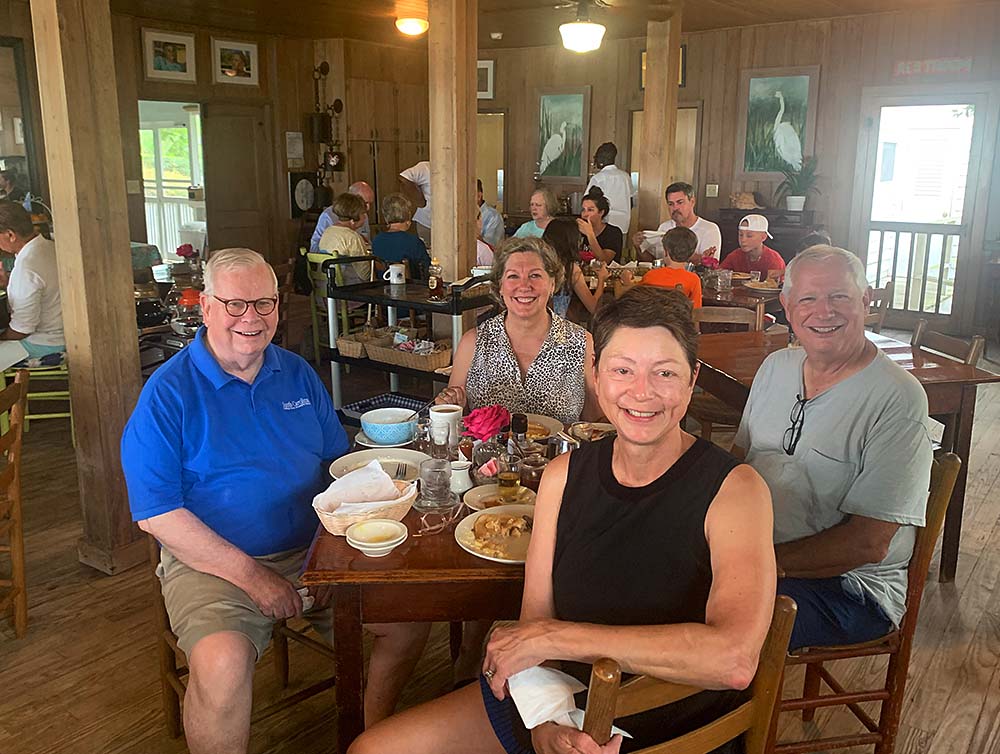 There are no televisions at the Sea View Inn and sounds from laptops and iPads are banned from the living room. There is a list of rules on the wall inside each bedroom including my favorite: Quiet Time from 2:30 to 4:30 p.m. every day.

The Sea View Inn has been owned by Sassy and Brian Henry since 2002 who we did not meet. The general manager has worked for the Sea View Inn for 12 years; he lives in Myrtle Beach and the assistant manager lives in a room on site. The Sea View Inn is a well-run business.

The next week found us Columbians at the Pelican Inn, also for two nights. The Pelican Inn has eight rooms, not 20 like the Sea View Inn, which is an advantage for personal service. We felt less like we were at a business and more like we were staying with friends.

The Pelican Inn did not start life as an inn but as the 1846 home of wealthy rice planter Plowden C.J. Weston. Weston owned Hagley Plantation that stretched from the Waccamaw River to the Atlantic Ocean. Wealthy planters like Plowden Weston had magnificent homes facing the river who also built summer homes along the ocean to escape the heat and mosquitoes. Weston’s summer house was special. In the late 1800s, an observer said the houses on Pawleys Island were designed and built without pretension, except for the Weston house.

Weston’s Pawleys home, called Weston’s Zeeland, had four bedrooms upstairs and four rooms downstairs and a wide covered piazza that circled the house. Distinctive arches were installed around the piazza that disappeared for a time but were uncovered by a later renovation. The kitchen was in a separate building nearby. Over the years, the building has changed, either because an owner wanted to rent rooms or a hurricane did damage or a new owner remodeled. Weston’s widow sold the house to William Mazyck in 1864 who sold it to the Atlantic Coast Lumber Co. in 1901 who sold it to Elizabeth Ferris in 1933 (she named it the Pelican Inn) who sold it to George Clark who sold it to William and Eileen Weaver who sold it to Theodore and Hope Evans in 1970 who sold it to Corinne Pearson Taylor and Bruce Taylor in 2010. Corinne, it should be noted, is from Columbia. 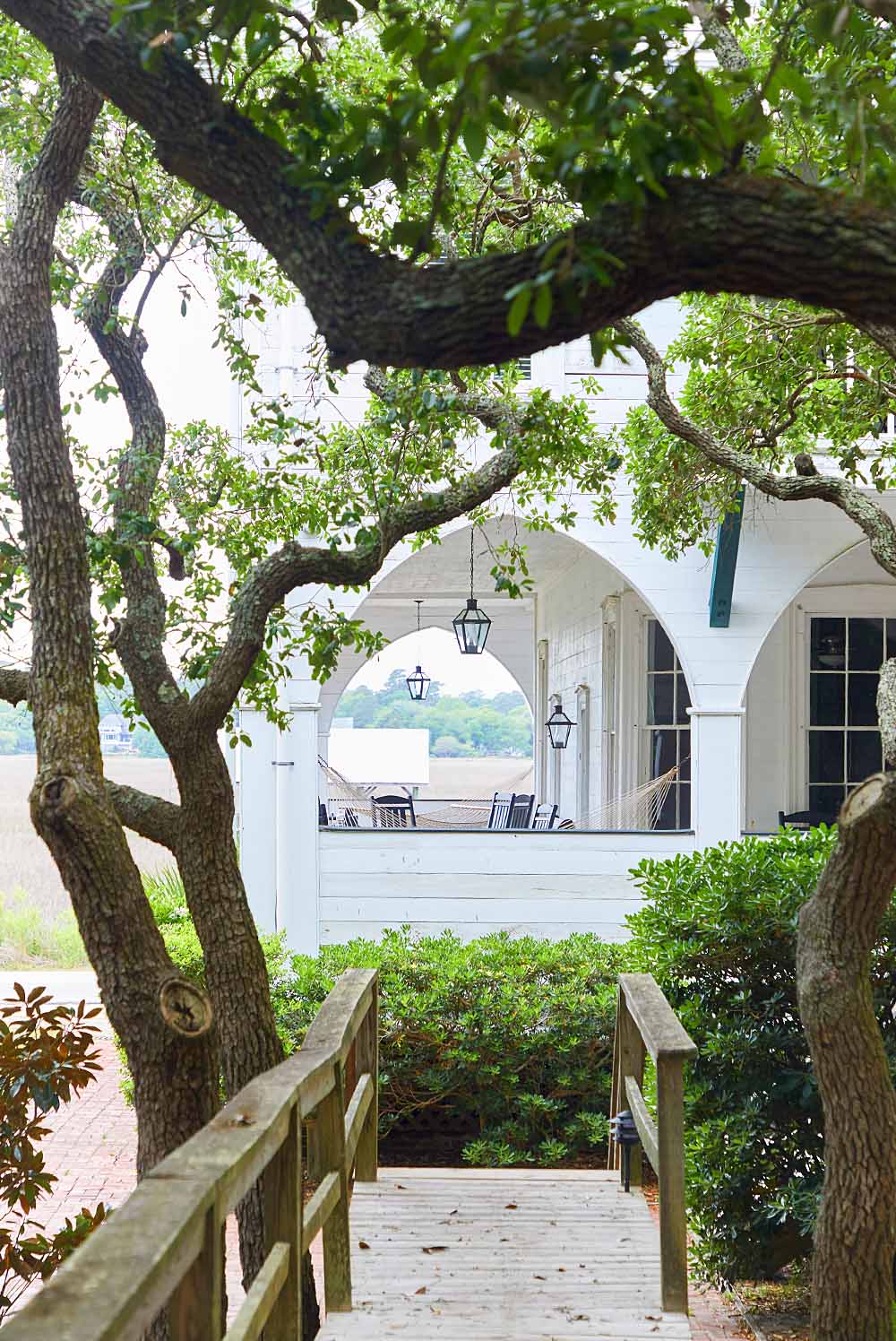 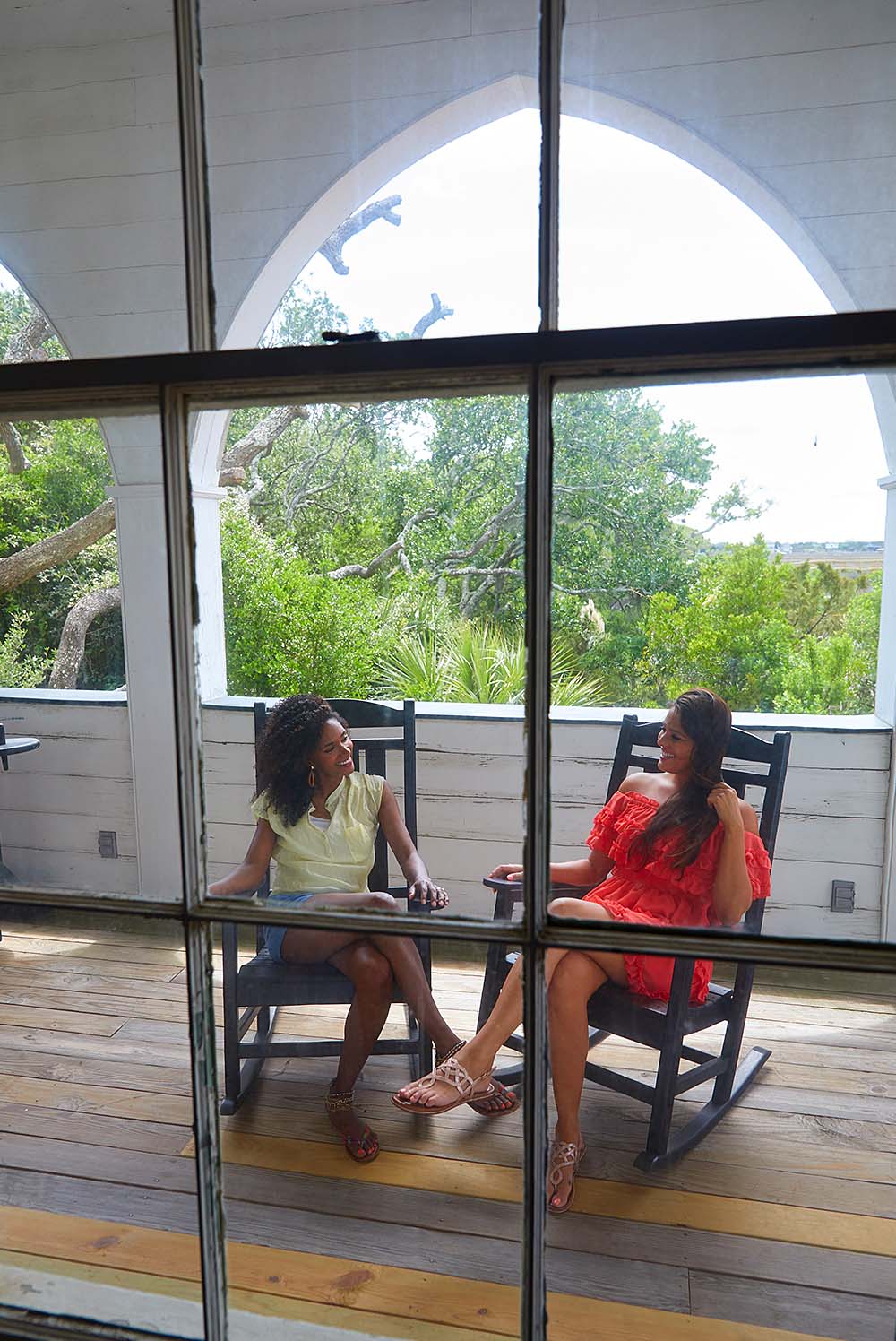 Currently, the Pelican Inn has eight bedrooms upstairs; four bedrooms have private bathrooms with showers and the other four bedrooms share two hall baths. There is a large living room downstairs for reading and board games and a dining porch where meals are served. The really good news is the entire building is air-conditioned and the bedrooms are quiet; again, no televisions. There are several dorm refrigerators for guests to store their goodies and wine glasses are set up every evening. Like the Sea View Inn, the hungry guests are summoned at the Pelican Inn by a ringing bell, at 8:30 a.m. for breakfast and 1:30 p.m. for lunch. The Taylors have the advantage of cooking for fewer visitors at the Pelican Inn which gives them the opportunity to be more creative with their menus. Their food was delicious.

The Pelican Inn is protected by enormous dunes covered with oak trees and wax myrtles. You cannot see the ocean from the top floor of the Pelican Inn even though the house is on the front beach; however, there is a small deck overlooking the ocean with a hammock perfect for an afternoon nap. The Pelican Inn also has a wonderful, covered deck by the creek in the middle of the marsh that we enjoyed visiting in the late afternoon with munchies and beverages. This deck, too, has a hammock. 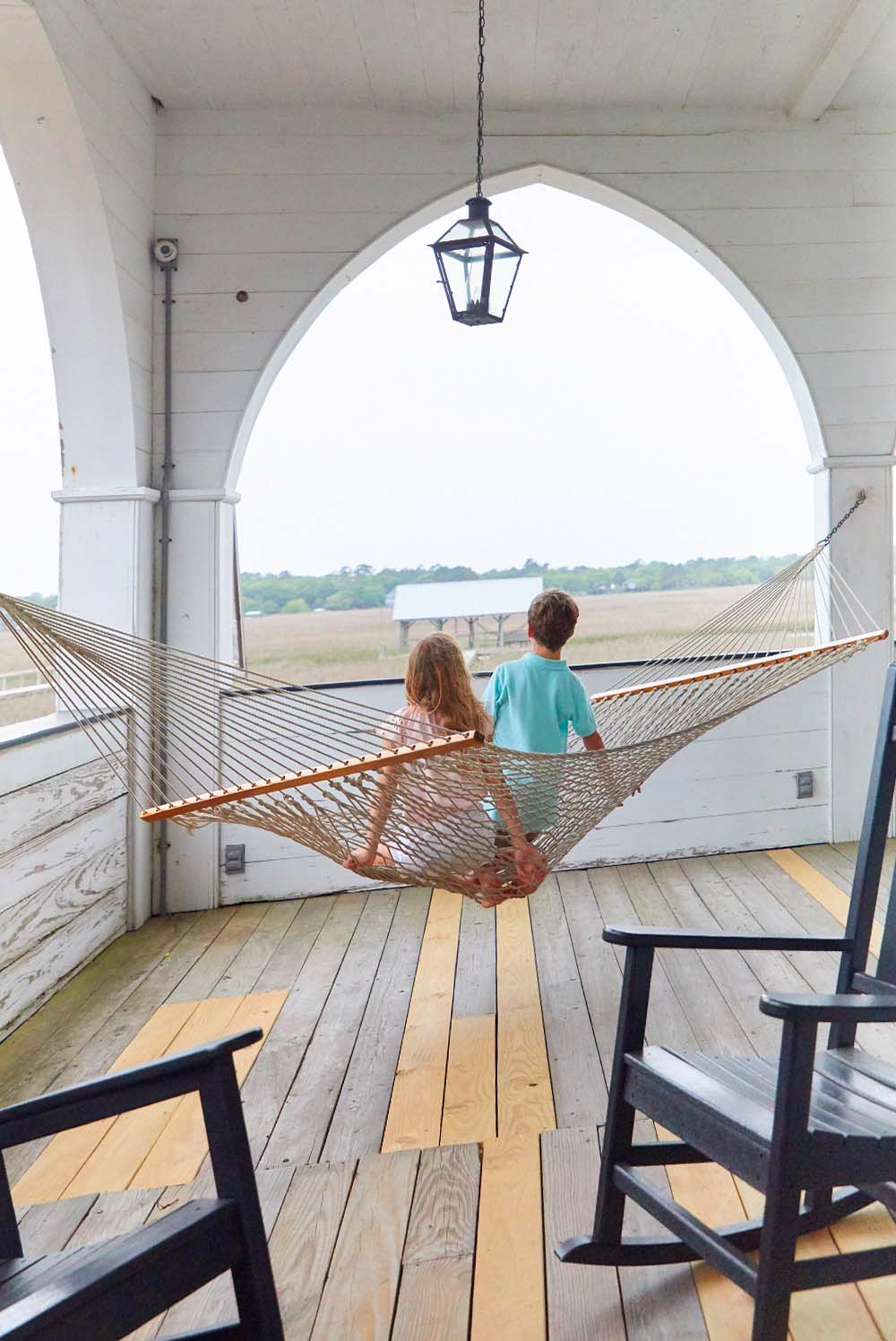 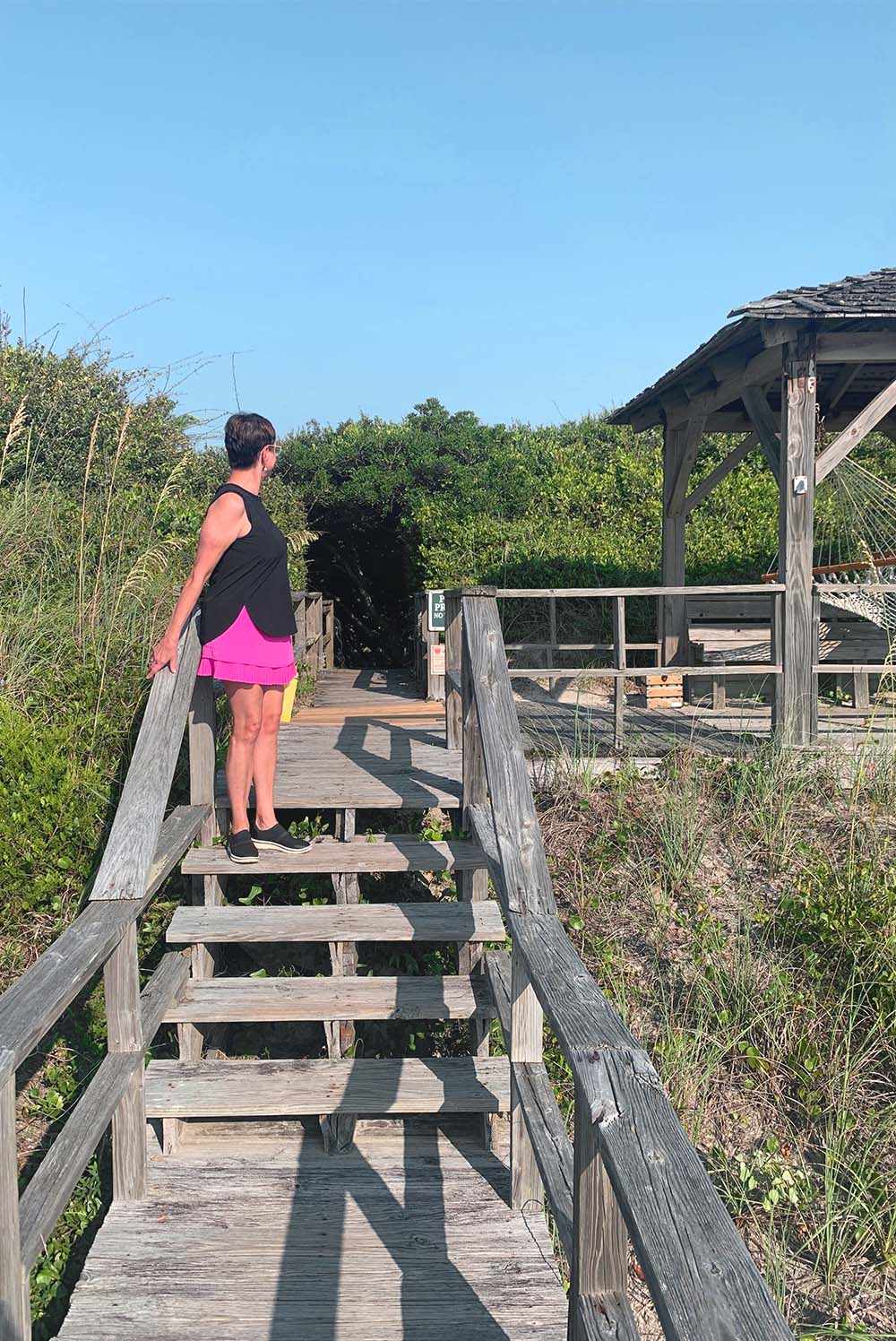 The Pelican Inn also has a tradition of families visiting year after year. The current owners, Corinne and Bruce, vacationed at the Pelican Inn 20 years before buying the inn in 2010. Bruce recently retired, but Corinne still has her career in Atlanta. They open the Pelican Inn three months each summer and do most of the cooking and cleaning. Corinne grocery shops each afternoon for food to cook breakfast and lunch the next day. Bruce repairs and cleans and cooks and serves. Basset hounds Myrtle and Ernest pretty much just sleep.

The Sea View Inn and the Pelican Inn are barely one-half mile from each other, one on either side of the South Causeway. We met visitors at each inn who would not consider going anywhere else. What a treat it is to have two inns on Pawleys Island, a destination for so many South Carolinians. Both inns have a two-night minimum stay and they should. These are special places on a special island, the only commercial businesses on Pawleys Island.

About the author: David Gregg Hodges has been married to Susan Graybill Hodges 41 years and has four children and nine grandchildren. He has been in the life insurance business with MassMutual 44 years. He serves on The Cooperative Ministry board, the South Caroliniana Society board, and is the incoming chair of South Carolina Humanities. He has served on the Central Carolina Community Foundation and has been the chair of the State Museum Foundation board. He is the author of Sunset Lodge in Georgetown: The Story of a Madam. He is an occasional contributor of articles to Columbia Metropolitan magazine and to the Coastal Observer newspaper in Pawleys Island.

Slow down on Pawleys Island